Latham & Watkins is pleased to present its fourth annual CEQA Case Report. Throughout 2020 Latham lawyers reviewed each of the 34 California Environmental Quality Act (CEQA) appellate cases, whether published or unpublished. Below is a compilation of the information distilled from that annual review and a discussion of the patterns that emerged. Latham’s webcast discussing this publication and the key CEQA cases and trends of 2020 is available here.

In 2020, the California Courts of Appeal issued 34 opinions that substantially considered CEQA. Additionally, the California Supreme Court issued one opinion, and the Ninth Circuit Court of Appeal issued one opinion. Significantly, in Protecting Our Water & Environmental Resources v. County of Stanislaus, the California Supreme Court held that Stanislaus County could not categorically classify the issuance of all well construction permits as “ministerial.” The Supreme Court explained that the plain text of the local code, which incorporated state standards, gave the County health officer significant discretion to deviate from general well permitting standards; therefore, the County’s blanket classification of well permits as ministerial violated CEQA.

Other key cases from 2020 include: 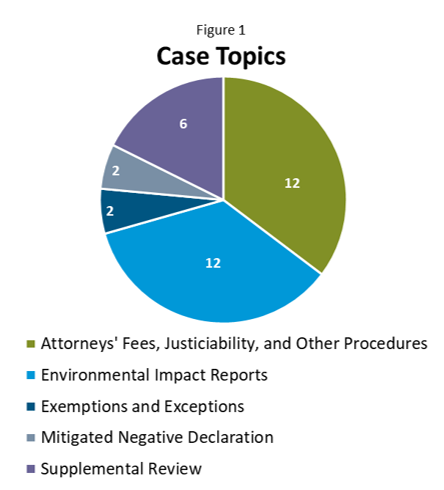 Of the 34 appellate CEQA cases, 15 were published and 19 were unpublished. Figure 1 (right) shows all 34 cases sorted by topic. An equal number of cases focused on Environmental Impact Reports (EIRs) and Attorneys’ Fees, Justiciability, and Other Procedures, which includes issues such as mootness, statutes of limitations, waiver, and res judicata. Each topic was the focus of 12 of the 34 cases, or 35%. This represents a moderate shift from 2019, when the plurality of CEQA cases (44%) centered around Attorneys’ Fees, Justiciability, and Other Procedures, and 31% of cases focused on EIRs. In 2020, six cases focused on Supplemental Review, two cases focused on Exemptions and Exceptions, and two focused on Mitigated Negative Declarations. For insights and commentary on environmental issues and developments impacting business in California, the rest of the US, and the world, visit Latham’s Environment, Land & Resources blog.