On May 10, 2022, the California Air Resources Board (CARB) released its Draft 2022 Scoping Plan Update for public review and comment. Originally, the California Global Warming Solutions Act of 2006 required CARB to develop a scoping plan, to be updated every five years, that describes the approach California will take to reduce Greenhouse Gas (GHG) emissions to achieve the goal of reducing emissions to 1990 levels by 2020.

Subsequently, Senate Bill 32 strengthened the state’s GHG emissions reductions target to at least 40% below 1990 levels by 2030 and former Governor Jerry Brown’s Executive Order B-55-18 established a second statewide goal to achieve carbon neutrality as soon as possible, and no later than 2045. Recognizing the need to achieve GHG emissions reductions more quickly, in July 2021, Governor Gavin Newsom directed CARB to accelerate efforts to achieve the state’s climate stabilization and GHG reduction goals, including to “identify a pathway for achieving carbon neutrality a full decade earlier than the existing target of 2045.” The Draft Scoping Plan Update identifies CARB’s proposed path for how California can reach both its interim goal of reducing GHGs by at least 40% below 1990 levels by 2030, and its ultimate goal of carbon neutrality by 2045 along with pathways that would achieve carbon neutrality by 2035.

Ultimately, CARB staff chose Scenario 3 (Proposed Scenario) as the one that “best achieves the balance of cost-effectiveness, health benefits, and technological feasibility” in meeting the state’s goals.[1] To reach the 2030 and 2045 goals, the Proposed Scenario envisions an all-of-the-above approach that promotes electrifying everything that can feasibly be electrified while also foreseeing a substantial role for clean fuels like green hydrogen and CCS for those emissions that cannot be easily avoided.

Figure 2-1, copied below from the Draft Scoping Plan Update, shows the GHG emissions reductions associated with the Proposed Scenario compared to the “Reference” or business-as-usual scenario. As shown in Figure 2-1, even in 2045, the Proposed Scenario envisions almost 100 million metric tons of carbon dioxide equivalent (MMTCO2e) that would need to be removed and sequestered to meet the state’s carbon neutrality goal, with CARB noting that “[t]he modeling clearly shows, there is no path to carbon neutrality without carbon removal and sequestration.”[2] Governor Newsom, citing the Draft Scoping Plan Update’s reliance on CCS, included $100 million in new monies for carbon removal projects in his updated budget proposal. To achieve the necessary GHG emissions reductions, the Proposed Scenario outlines what CARB believes will be necessary across various sectors including transportation, buildings, manufacturing, and electricity. Regarding transportation, the Proposed Scenario envisions the rapid deployment of zero emission vehicles across all vehicle categories. As shown in Figure 4-2, copied below from the Draft Scoping Plan Update, the transportation fuel mix in 2045 under the Proposed Scenario sees a substantial decrease in liquid petroleum fuels with increases in electricity, biofuels, and hydrogen. The Draft Scoping Plan Update predicts the importance of the Low Carbon Fuel Standard (LCFS) in incentivizing private investment to achieve these goals and calls for a public process focused on increasing the stringency and scope of the LCFS. 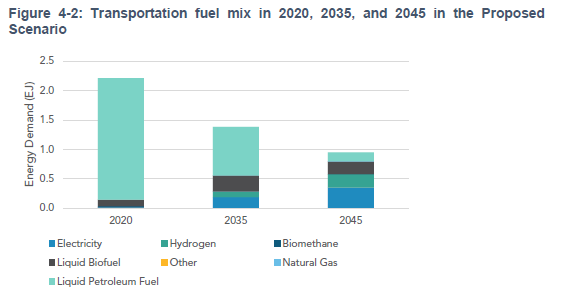 Under the Proposed Scenario, buildings in the state will almost completely decarbonize by 2045, with the use of fossil natural gas decreasing to a fraction of what is used today. The Proposed Scenario also relies heavily on energy efficiency to achieve reductions in building emissions, as demonstrated by the overall reduction in energy demand from buildings, shown in Figure 4-8 copied below from the Draft Scoping Plan Update. 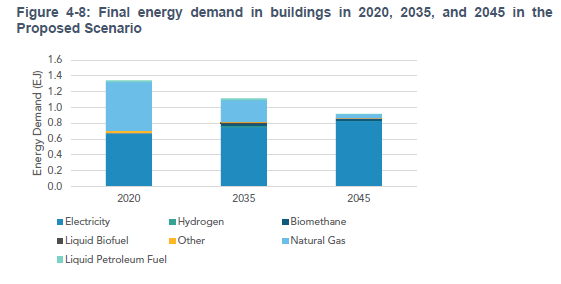 CARB recognizes the importance of California’s industrial sector to the state’s economy and workforce but also recognizes the difficulty in decarbonizing some industrial activities such as steel forging, glass manufacturing, and industries with calcination processes, such as manufacturing lime and cement that cannot be easily electrified because of the high heat required. For these activities, the Proposed Scenario envisions a fuel switch to hydrogen, biomethane (aka renewable natural gas, or RNG), or other low-carbon fuels, with a specific strategy to “develop infrastructure for CCS and hydrogen production to reduce GHG emissions where cost-effective and technologically feasible non-combustion alternatives are not available.”[3]

CARB calls decarbonizing the electricity sector a “crucial pillar” of the Draft Scoping Plan Update. If California does not decarbonize its electricity sector, the electrification across all other sectors will fail to achieve the necessary GHG reductions to meet the state’s goals. Figure 4-5, copied below from the Draft Scoping Plan Update, shows not only the required transition to renewable resources but also the required growth in overall electricity resources by 2045. 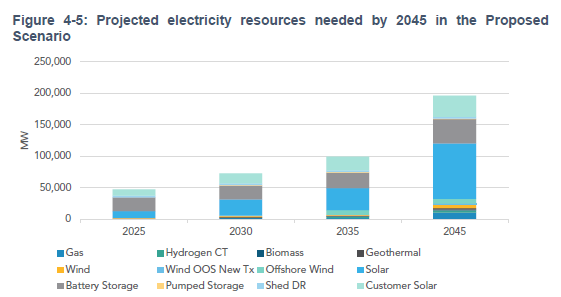 Latham & Watkins is tracking this process and will release additional blog posts on the Scoping Plan Update’s discussion of the LCFS Program, the state’s Cap-and-Trade Program, and climate adaptation.